50 YEARS + OF HELPING OUR NEIGHBORS IN NEED 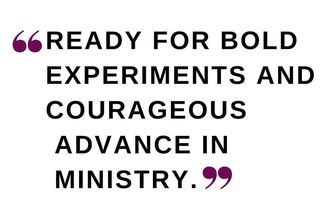 ​
FOCUS was created in 1967 when four downtown churches joined together in response to great social change.​ ​ ​​In the 1960s downtown Albany was undergoing radical change with construction of a new state office complex.  It was also a time of social change, the civil rights movement and anti-war controversy. Four downtown churches (First Presbyterian, Emmanuel Baptist, Westminster Presbyterian and Trinity United Methodist) were dealing with these issues and with many of the same questions.  As a result FOCUS was formally created 50 years ago to “do together what we could not do alone”.
The FOCUS Food Pantry (opening in 1976) and Breakfast Program (opening in 1984), were formed as “temporary” feeding programs to meet the increasing need.  Both have expanded and are still central to FOCUS’s mission. Many volunteers from the FOCUS churches and the wider community are key to the operation of these vital programs.  Advocacy has become an increasingly important part of FOCUS’s mission, addressing issues of poverty, hunger and homelessness - charity and justice go hand in hand.
Over the years, FOCUS Churches joined together in a number of other ways. These include, with a few examples:
Today there are six covenant churches and five interfaith affiliates who support the work and mission of FOCUS.  Current programs include the Interfaith Food Pantry, the First Church of Albany Food Pantry, Winter Breakfast Program, Breakfast Express, advocacy on social justice issues to end hunger and poverty and Gardening in a Bucket to promote healthy eating habits and help others learn to grow their own vegetables.

Some Highlights in FOCUS History

From the original FOCUS mission statement, 1968

The mission of the Church is to be a pilgrim people, taking new form and new shapes according to the need of each community into which she needs to be scattered.  In this connection, it is helpful to recall that the very symbol of the Church in the New Testament is not a house, but a tent, suggesting that the Church is characterized, not as a fixed community with all patterns set, but as a community on the move, ready for bold experiments and courageous advance in ministry.
Read a comprehensive early history of FOCUS in celebration of the FOCUS 25th anniversary here.